In the 1980's, researchers studying earths atmospheric conditions began to notice a reduced concentration of ozone over Antarctica. For several years the data collected was said to be incorrect, that it was due to a malfunction in the instruments taking the measurements. In 1988, researchers concluded that there was indeed a hole in the ozone and that it had been developing over a period of 10-15 years. The Ozone hole first appeared in the Southern Hemisphere, more accurately, in Antarctica due to the continents isolation from the rest of the globe.

The hole over Antarctica formed due to several distinctive atmospheric conditions that coexist to create an ideal climate for the destruction of the oxygen molecule.

When spring arrive the PSC's begin to melt, slowly releasing the halogenated compounds that were confined to the cloud. The arrival of summer brings with it the arrival of high energy photons, which interact with the CFC's, freeing the halogen radicals that act as catalysts in the destruction of O3. Because of the polar vortex, the halogenated compounds cannot diffuse accross the earth and hence the ozone hole is formed. 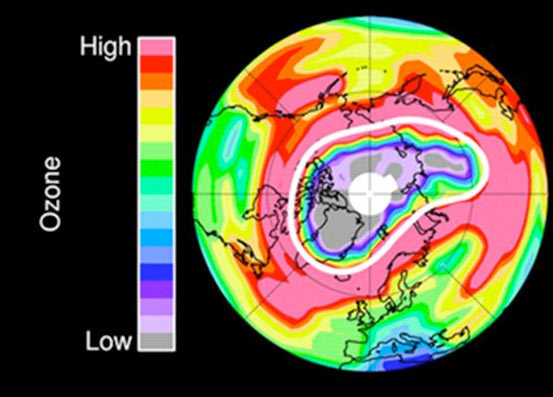 This image shows that the hole is not in fact a hole at all, but rather a gradual decrease in the amount of ozone from the central point of the southern pole.
Powered by